The power of a reversed lens

Do you own two or more lenses and want to try out some inexpensive macro photograhy? Good!

How to do this? You simply take a lens, reverse it and hold it in front of the lens on your camera. I used a Nikkor 18-55VR as the reversed lens and a Nikkor 55-200VR on the camera. To hold the lenses together you can use for example electrical tape. Electrical tape is good because it doesn't leave any marks when you remove it. Instead of tape you could buy a reverse filter from Ebay. They are cheap, and are made for mounting stuff like lenses together.

My Nikkor lens is defaulting to a very small aperture when not mounted on the camera. This makes it very hard to actually see anything at all when taking photos using this method, since the lens is letting through so little light. What you have to do is find a way to lock it at a bigger aperture or manually set the aperture. My lens has got a little mechanical switch at the top of it, with which you can set the aperture. I used two broken matches to hold the switch, as you can see in the following picture: 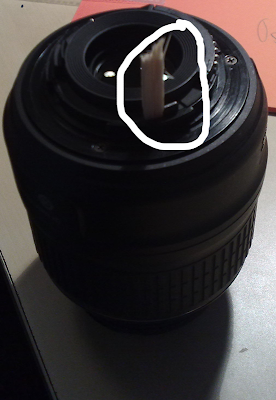 If you're not as lucky as me, and your lens hasn't got any manual switch, you will have to find some other way to set the aperture. One way could be to set the aperture while having the lens mounted on your camera, and then removing it with the camera still being turned on. But this is not something I have tried, it could damage your camera, and I don't recommend it. So try this at your own risk.

Now you're ready to try out some, still inexpensive, but better macro photograhy. It's not a method as flexible as using macro filters, but the result you'll get is much better.

This is how my setup looks: 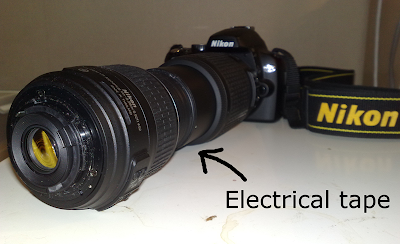 And the following is a picture I took of a (this time dead) fly. 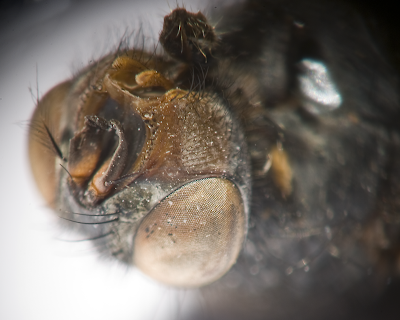 This method is cheaper than using a real macro lens. It's not as flexible as using macro filters (or a real macro lens), but the results is quite good. And as always, if you want better quality, you'd have to buy more expensive equipment.
Upplagd av Osvald kl. 14:18